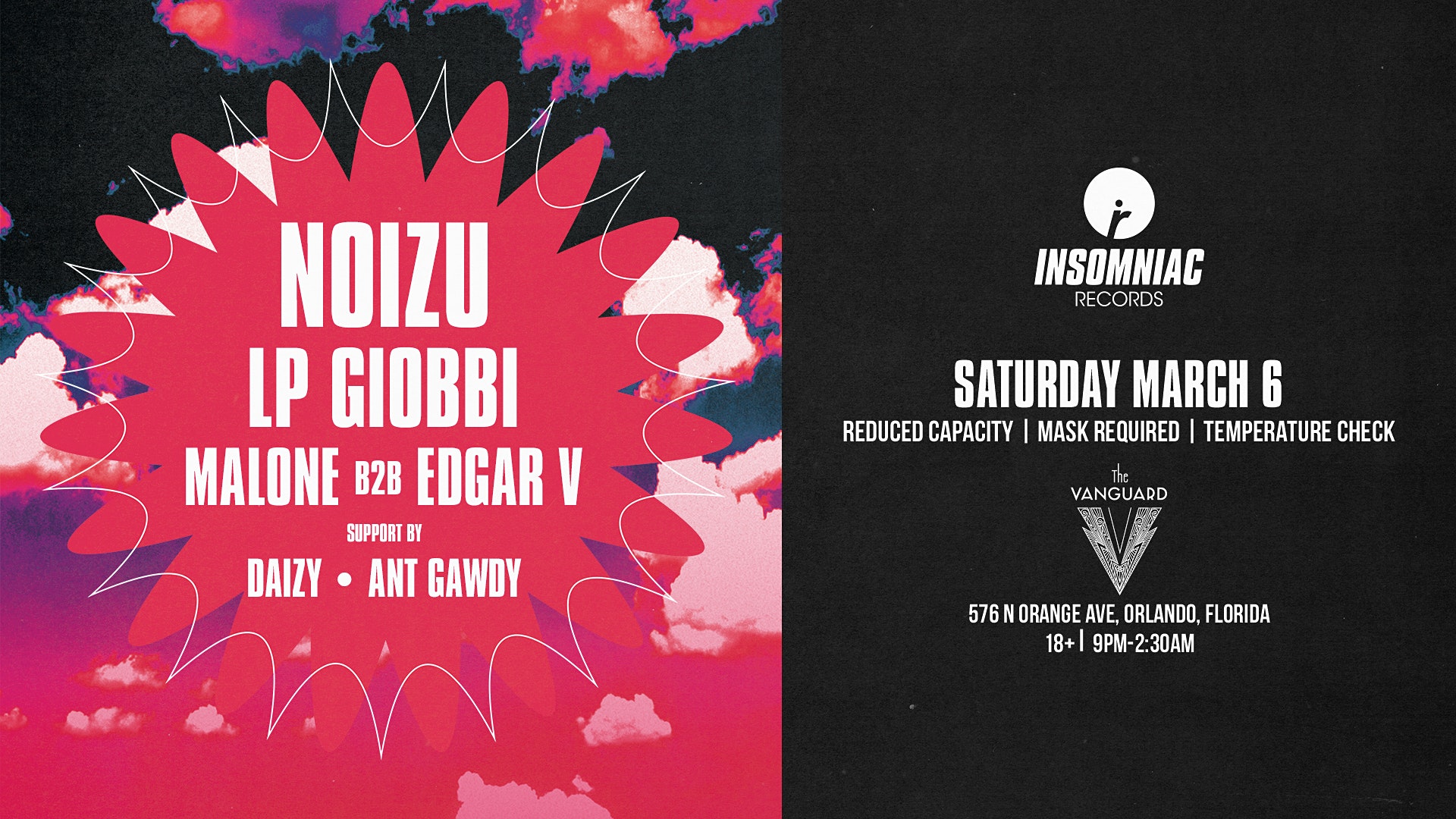 Noizu
Noizu from Los Angeles, made his debut on the HOWSLA EP with his song Lasers after being selected by Chris Lake & Skrillex. Lasers caught the eye of Tchami and Noizu released his debut EP, JUNGLE EP on Confession to an amazing reaction. After a huge amount of support from A List Djs he was asked to remix DJ Snakes hit "a different way". His first ever remix is at 1.7m streams and featured on Spotifys Mint playlist. He ended 2017 making his debut tour supporting Tchami, Malaa and Rezz. 2018 started with a bang, an official Tchami remix and now his first single of 2018, LFO. Accompanied with incredible visual animation, the Noizu story is just beginning. 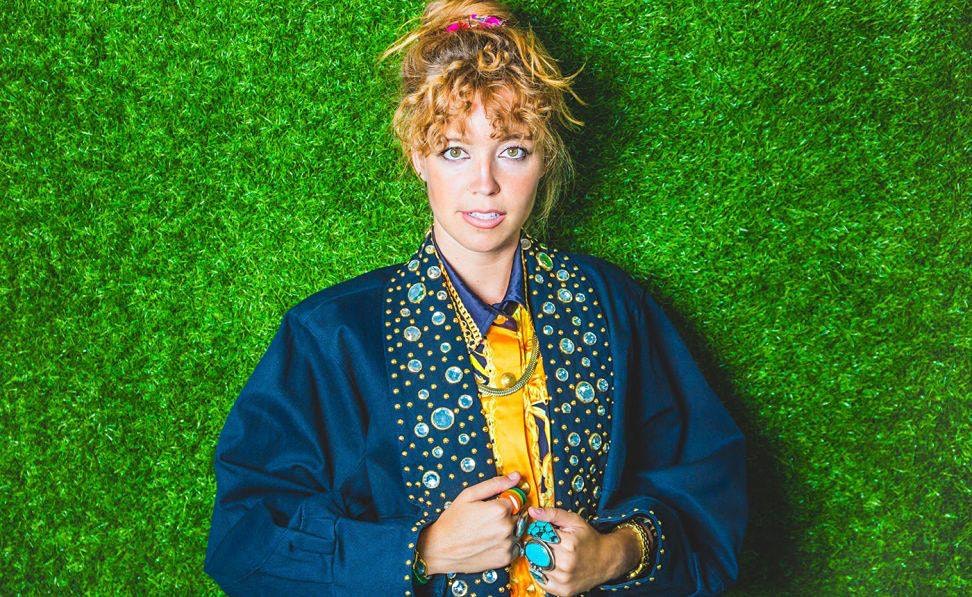 LP Giobbi is rock ’n roll with a disco soul, born draped in sequins and cloaked in fog at a seance in the mountains of Oregon.

She was trained in jazz piano at UC Berkeley before becoming a synth warrior goddess in Los Angeles. She uses her combined knowledge of music theory and sine wave creation to reach the enlightenment afforded by a clusterfuck of inclusivity. Her weapons are charisma, spunk, fearlessness, Pioneer decks, blacks and whites, DAW systems, fields of synthesizers, sequins, feathers and leopard print—and she’s not afraid to use them.

She’s shared the stage with everyone from Gallant (providing support for Billboard’s Next Big Sound showcase) to Madame Gandhi (playing synth bass and DJing), and is currently touring with Sofi Tukker throughout Europe and North America, throwing down her self-produced Afro-Cuban infused piano house tracks with her Korg M1.

When she’s not chasing down pianos to play jazz gigs, or producing, engineering and music directing, you can find her DJing and booking shows for W Hotels as their Music Curator, providing a platform of visibility to woman-identified acts with her initiative, FEMMEHOUSE, at August Hall San Francisco, and releasing tracks on Sofi Tukker’s new label, Animal Talk (which she also co-owns). You can also jump tits first into her wardrobe with her Giobbi line of shirts.

Edgar V has been quietly earning his repertoire in and around the dance music world. Synonymous to his personality, it may be difficult to tell during and after one of his signature prolific Progressive house sets. They are filled with a masterful blend of orchestral strings, ethereal vocals, uplifting synth patterns with a spunk of tribal bass filled house. Owning residencies in Miami’s most infamous dance clubs Edgar V has been on the forefront of Miami’s dance music.

Edgar began spinning at clubs in the then infant South Beach club movement with a start at Les Baines a heavily popular club in early 90’s. As the scene grew “bigger” and “better” Edgar lead the way holding residencies at influential clubs such as KGB, Liquid, Shadow Lounge, and was the first Club Space resident. Soon Edgar became a staple and unsung hero behind all the clubs he played at. Creating energy filled memorable nights transcending a buzz around him after each night. His current residency is at Gryphon Nightclub in the all new Seminole Hard Rock Hotel and Casino.

Helping his clubs not only become local favorites some of the most heavily talked about and known clubs on planet earth and making them an absolute stop of every major touring DJ. In early 2000 in collaboration with Club Space Miami Edgar’s debut mixed compilation Trancemission became a favorite among Trance fans worldwide. Playing along the world’s elite list of DJ’s such as Paul Oakenfold, Paul Van Dyk, Tiesto, George Acosta, Judge Jules, and Carl Cox, Edgar V has earned their respect being “handpicked” by Oakenfold to Open for at infamous sets such as Spacefest ’01 and invited by Van Dyk to play along with him at his party in Berlin Vandit and Cream Ibiza at Amnesia in 2007. Being mentioned in publications as Mixer Magazine, BPM, D’Vox and credited in albums by Deep Dish and Oakenfold the buzz around Edgar V cannot go unnoticed. Already making his mark globally Edgar V has played, Ibiza, Berlin, Mexico, Peru, Tokyo, Canada, Panama, Colombia and major clubs in the United States along with headlining some of the world’s biggest festivals and showcases. Gaining more residencies along the way and praise from the industries most talented and successful dance music leaders Edgar V is not looking back.

Born and raised in Miami, Malone’s passion for music started at an early age, where he was taught the basic techniques of DJing by his uncle, a DJ in Miami throughout the 80s, at the age of 10. Taking piano lessons as a kid, and some music courses in college, Malone has been producing/djing electronic house music since 2012.

Along with many remixes and other originals released in 2017, Malone released plenty of new music in 2018. With multiple tracks signed to labels such as Spinnin Deep, Armada Subjekt, Milk & Sugar, and many more house/tech house labels in the industry.

2019 should be a breakout year for the artist. As he is set to have releases on some of the biggest House/Tech House labels in the world in combination with the development of his concept party “Why Not Us?”

Dara Delcastillo, professionally known as Daizy, is an international DJ who began her career when she was 17. Born and raised in Miami, Daizy fell in love with the underground music scene, more specifically, house and techno. Her roots originate from Tel Aviv, where she spent four months working with international musicians and performing at her first nightclubs. Taking inspiration from artists such as Tale of Us, Damian Lazarus, and Dennis Cruz, Daizy has been described as  polyphonic. When it comes to her mixing style. When she isn't on stage, you can find her in the studio preparing for her first original track release coming 2021.